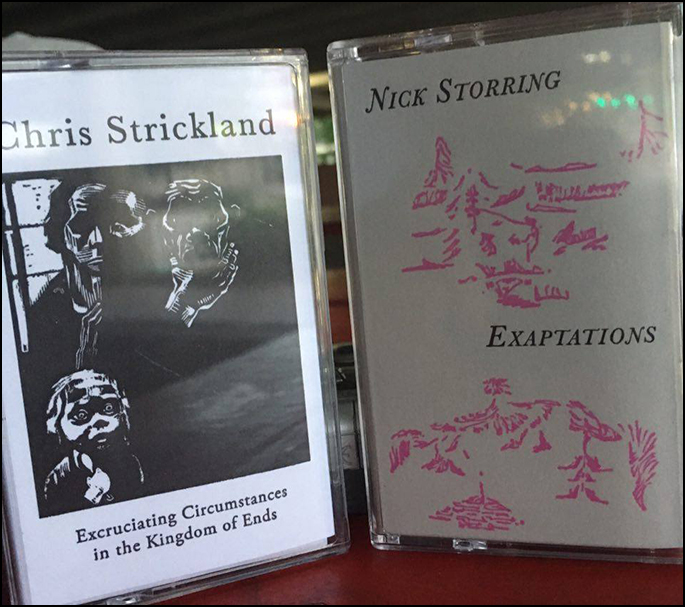 Notice Recordings, currently a Portland-based operation, has been dropping excellent drones, textures, and sound art for a lucky seven years so far, featuring artists like Coppice, Haptic, Jon Mueller, and Rafael Toral. Their latest batch features a pair of heavy tapes from our neighbors to the North that are well worth your analog attention.

Chris Strickland – Excruciating Circumstances in the Kingdom of Ends

Montreal sound artist Chris Strickland opens this batch with a trio of deep listening experiences. Opener “Excruciating Circumstances” launches into a sort of upper-mids focused electroacoustic prelude, with excellent violin work by Guido del Fabbro that serves to ground some otherwise otherworldly drones made from, y’know, the usual “acoustically filtered broadband noise.” From there, strings become a dominant texture, focusing mostly on higher-range harmonics played senza vibrato, and Strickland carefully weaves sine waves of similar frequency around these sustained pitches. Short movements continue to unfold, balancing strings and electronics in carefully-measured proportions that generally sustain a particular dynamic within their part of the timeline. Ultimately, though, the passages with high-freq addition tones give me a little fatigue after sustained listening.

“A Little White Space” is an excellent companion piece that’s much more full-frequency. Field recordings create ambient contexts for similar high-freq sine wave/instrument duets, and the subtle addition of those textures really opens up the perceived space that this piece occupies. Solomiya Moroz’s flute replaces the violin here, playing with a similar non-vibrato approach that focuses instead on resonance and overtones. The piece evolves slowly, but it feels like it’s traveling in a relatively specific direction that’s a delight to follow on headphones.

The B-side captures a single longer set entitled “Kingdom of Ends.” This piece has a more continuous-feeling structure, and the environmental recordings that lurk within its folds dissolve into the ambient sounds of the room where this performance was captured. del Fabbro returns here on violin with an even subtler approach, blending seamlessly into this excellent lowercase/EAI kind of experience.

Composer/multi-instrumentalist Nick Storring’s Exaptations matches a pair of deeply layered pieces whose focus on particulars of texture and space expand on some of the less tonally-focused moments on his excellent 2014 “Endless Conjecture” tape for Orange Milk. “Field Lines,” a composition created for an Yvonne Ng dance piece called “Magnetic Fields” provides a beautiful series of dreamy soundscapes, heavy on pitched percussion. As this piece drifts between sections, sounding at times like some of the lower-density sections of Partch compositions, the pauses themselves take on a palpable weight, sustaining the unresolved tensions of each movement. While some sections coalesce around stable rhythmic pulses, percussion often functions more as punctuation in the midst of cautiously-evolving textures and drones. The last third takes on more of a melodic/harmonic role, with pianistic flourishes and string crescendos, before settling back into the surreal fabric of earlier sections. It’s a surreal listening experience that’s surprisingly delicate considering the complexity of layers behind its construction.

“Yield Criteria” occupies the B-side of this release, and it cultivates a related kind of ambient, texturally-oriented voyage. Though synths aren’t listed among the instruments used, many sections deploy layered drones that recall cinematic synth pads sonically. Other passages are almost purely focused on texture after further processing, recapturing sounds transformed in unusual spaces and through a battery of transformative speakers and mics. On the whole, this piece stays closer to a “traditional” electroacoustic vibe, and it’s a little colder and harsher than “Field Lines.” Considered together, they form a thoughtfully-contrasted pair, and since both have found life outside of pure music-for-listening (“Yield Criteria” passages are featured in Eva Kolcze’s film “All That Is Solid”), the album title speaks beautifully to the idea of musical traits finding new kinds of significance in extramusical environments. It would be a pleasure to experience this music in its ballet/film contexts, but it stands on its own perfectly well, too.

Like previous cassettes on Notice Recordings, both of these tapes feature gorgeous letterpress j-cards on heavy cardstock made by Fitzgerald Letterpress in New Orleans. Their editions of 100 usually don’t last long, so snag ‘em while you can via Bandcamp.