Midori Hirano and Kris Limbach – The Last Day On Earth
7.7.17 by Ryan Masteller 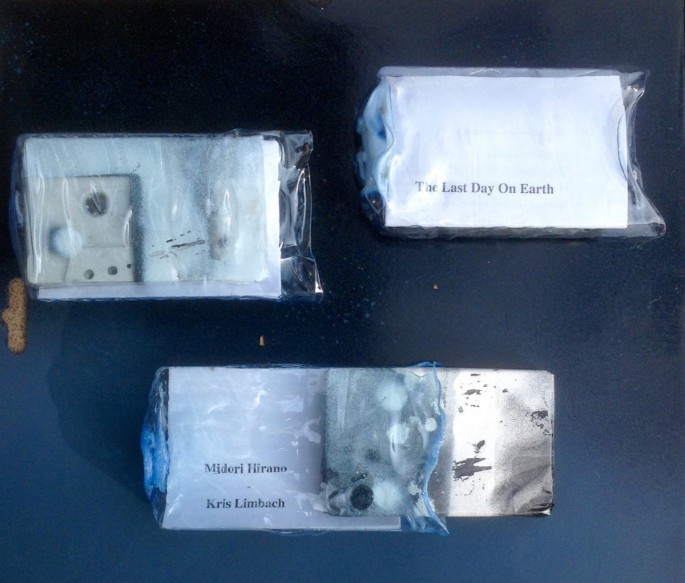 “The Last Day on Earth” is a literal message in a literal bottle, the plastic recycled, heat-warped, then sliced to fit a cassette tape. Can I get serious with you for a minute here? “The Last Day on Earth” gets serious, Midori Hirano and Kris Limbach get serious, and Staaltape, the adventurous label run by Rinus van Alebeek out of Berlin, is always serious. I’m continuing on that track – there’s not a note on this tape that isn’t completely and fully imbued with emotion. Van Alebeek suggests that Hirano, on her side, completely disappears into the composition, the piano taking over as if it’s observing humankind with its melancholy, desperate fragments, watching the end of the end of our destruction as we wipe each other out, because isn’t that what we’re wired to do? Hirano’s a spirit somewhere but not here, her absence a weight of despondency. Her piece exists to watch the ocean lap the shore on a gray day, no human beings in sight – suggesting a natural makeover whereby the planet is returning to a state before we came along and gunked it all up. “They don’t sleep anymore on the beach,” broadcasted Godspeed You! Black Emperor on “Sleep,” and they sure don’t. No one does. We’ve seen to that. These sparse notes emitting dirgelike from the mouth of Hirano’s piano mourn the passing of those who once did. God, “The Last Day on Earth,” by which I mean the actual day, is so depressing.

Kris Limbach reacts to Midori Hirano’s score of apocalypse in the only way that makes any sense – with field recordings inspired by it. The actual last day on Earth, recorded, preserved as a time capsule – for what, whom? “There is not a single man living on [Earth] / There is no future and no history and there are no bloodthirsty animals that tear each other to pieces.” I’m not sure if these words, inscribed on a photocopied 8.5 x 11-inch piece of paper and folded to accompany the sounds, are intended to suggest actual feral animals or the actual feral animals we goddamn humans have become, vicious, toothy beasts who howlingly tear at each other’s throats with the least provocation. Chomping, tearing, scratching, rending, roaring in great bellicose and misplaced anger. I hope that Rinus van Alebeek and his network and community of artists find some solace in each other, in the sounds they wring from their minds and their instruments and their sources. Or maybe they’re all gone too, and I’m just a ghoul willing these keys to type themselves with my mind (or my ectoplasm!) in the hope that someone will read this and seek out this tape before it’s too late, this tape that will then assist them in their passing into the great beyond, whatever comes after Earth. Heed this message in this bottle. Heed all messages in all bottles now, as everything’s an SOS and everything’s a warning. Well, maybe don’t heed messages that point closer to destruction (no funny hyperlinks here – I’m sure you can imagine some examples without a digital aid). I’m hoping, as a reader of this very serious site, that you will be able to separate the wheat from the chaff. Or the wheat from the horseshit, as it were. You’re a good kid, you’ll figure it out.

I marvel at the packaging: 1 (one) warped and melted and chopped water bottle, repurposed; 1 (one) folded piece of 8.5 x 11-inch piece of paper, typed upon; 1 (one) carefully wrapped cassette tape in some sort of spray-painted cellophane, which I could not nicely wrap back around the tape properly once removed; 1 (one) spray-painted (or otherwise similarly treated) cassette tape. Clearly a lot of thought and care went into this. Edition of 26 (twenty-six), of which 6 (six) remain. But don’t worry, Rinus is going to make more when they’re all gone.