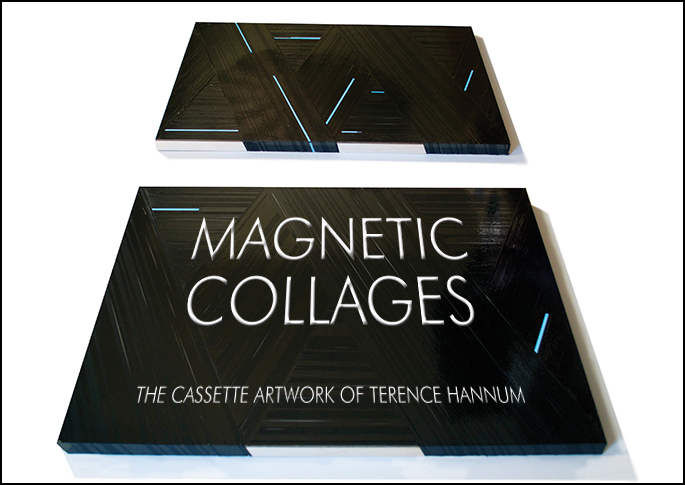 Studies show that 88% of the time the magnetic and leader tape is unraveled from it’s shell it is a total bummer [citation needed].  It’s a totally different story for musician and visual artist Terence Hannum. Terence, who teaches Art Foundations at Stevenson University in Maryland and spends time laying waste in his band Locrian and solo, creates remarkable works of art using the tape, leader, and dust from the magnetic coating of unspooled cassettes. The results are outstanding. I spoke with Hannum a bit about what he is doing.

How long have you been working with magnetic tape like this?
About two years now, but I have been messing with tapes for about 22 years, dubbing, looping, etc.

What was the catalyst for working with it to create these pieces?
Well I use a Roland Space Echo, and I have for a few years with Locrian. I was replacing the tape and artistically I was in a bit of a funk, I just had this show close of some drawings and collages and wasn’t happy and like everything I tried wasn’t going where I wanted it to. So I was replacing the tape to record something and I share my music studio with my art studio, and the tape unspooled across some of my drawing paper and the surface just caught my attention. It was like that 1/4″ brown tape, I always make fresh loops for my machine. It just got me thinking, like how do I adhere this, what will it look like?

How did that first experiment turn out?
It was like a search for the perfect adhesive, so many of the first ones are rough. But within a few weeks I got it to work. I mean they maybe look tight from a far but what I like is that they get marred and break and have problems. Some of the mistakes are important. 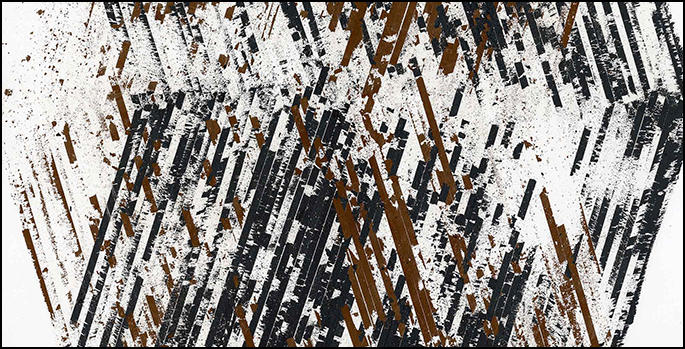 So what were some of the trial and errors you went through before getting it right? And what is the process like now?
Well it wasn’t just the adhesive, but the surface too, so finding a great flat paper and perfect flat surfaces. That became important, I really wanted it to be like this mass of time, where typically you think of time and audio in they linear fashion, but laying it out parallel in this mass can allude to painting but also when you learn of the material maybe make you think of time differently. One of the errors that I use all of the time now, is I tried to fix a line once and all of the ferrous dust stayed behind, and I thought, well that’s a neat way to make a line. So now I essentially use the adhesive surface to peel off the mylar coating and leave behind this magnetic dust trail. Some brands fail better, but it’s been a great discovery.

Do you ever record any audio onto the tape, specifically to make these? Or make loops out of them afterwards?
No, sometimes I’ll use something that was significant to me. Or something that it being destroyed would have a new meaning or the context changes. But typically once they’re on the panel or paper it isn’t to be played, like do you know Nam June Paik’s “Random Access”? That was a big inspiration for me.

That’s interesting because most of your work seems organized and somewhat structured. Do you go in not knowing what patterns you’ll make or where the leaders will land?
Sometimes I don’t know, but I do a lot of sketches and drawings. I always work on pieces as variations, I was really influenced by early 20th century composition, like try this set of ideas again. I think John Cage did that with David Tudor. And obviously in like modern art and the history of abstraction that is a method to work with. Sometimes the leaders I try and save them to punctuate at certain points, and others I like to be exactly where they showed up so that sense of time is really expressed.

Do you look at cassettes differently now? Do you ever see one with a red or green leader and start thinking about wrapping it around a canvas?
Oh yeah, man I am an obsessive, I go to thrift stores and I am positive they think I am insane because I open all of the tapes and see what color is the tape or the leader, or is there something weird on it that I don’t have. I collect a ton of vintage head cleaner cassette too, like I have maybe 50 of them.

That’s amazing. Were any of those obsessive traits, or your interest in head cleaners, present before making these?
I mean I obsessively would follow labels or designers, I have a collection of the tapes Peter Saville designed for Factory in this luxe packaging. I always do research, maybe its obsessive, but I think of it as research.

Are there any ideas you have to take this project a step further that maybe you haven’t figured out how to execute yet?
Size. I’ve been trying to go larger so I am figuring that out. I’ll be getting some custom panels built. And I’ve been exploring two new ideas from my recent residency that were surprises to me focusing more leader. So like minimal color studies. I recently did a two week residency in Vermont at the Vermont Studio Center, essentially working 12-14 hour days in a great studio near a waterfall. Drinking sweet brews, but it was great, I made a lot of work and had some great studio visits.