Kenny Torrella, “D.C.’s sleeper cell groove sensation” sort of just wandered into 100% Silk last summer with arguably the label’s best effort since Ascultation’s III back in Summer 2020. It was so noteworthy, the label decided to revive their defunct House of Silk imprint just for the release of the Out of Office cassette. And when I was doing the Tabs Out Top 200 of 2022, I ended up stumbling into the tape and the last available copy from Torrella personally.

There are two things that have struck me about this tape and its illustrious qualities. Firstly, as lo-fi house (balearic stylings and bells and whistles are abound) it immediately warrants tape listens when applicable over any other sound system. The songs, specifically Magic Mirror & The Zone, are washed out and soaked in glitzy, effervescent textures that tingle and pop; they are funky fresh bops that are often otherworldly heartfelt and emotive. Other cuts, like the OOO mixes of All the Time & With You, Yeah purposely stick out of the low end, in lieu of imparting a crisp, ghostly layer of airy amber-laden synths on top of the crunchy beats. Tackling a sound like this can be merely pleasurable or it can impart a longing; any tape on 100% Silk could be this at any given day. Yet, Torella’s beats and smattering of almost-voices across the mid-range give the tape these feeling of window shopping on an abandoned stretch of the Miracle Mile. Bittersweet only could capture so much of what makes the tape ingenious.

This brings me to my second point: Torella’s synths LONG and YEARN in a rather resonate manner. While the fetishization of 80s/90s technology is merely a given at this point, the logic behind chasing these sounds and what one is supposed to do with them can be situated in many frameworks. And from there, why a sound becomes so hypnotic you want to live in it becomes its own mission statement. The synths that often ground a majority of this album are encroaching on a particular snappy n’ soppy or punchdrunk drone quality that puts the tape in a lineage dating back to mid-80s The Wake and their own emotive synth laden works. But they did not dance, they brooded unnervingly; whereas Torella purposely is chasing daydreams and crystalline midnight hours with brevity and gentle ease.

Anyways, if you haven’t heard Magic Mirror, it’s streaming below. Tapes Sold Out at the Bandcamp, but still available at the 100% Silk distro page on Midhaven dot com.

Another steamer of a Hot Releases tape complete with a tasteful nude. Permanent is Mimi Luse, who in the middle of June last year, laid down 10 cuts all without names outside of “Museum A0.” What ensued was not quite the synthetic populism of her previous tape, nor is it quite a minimal wave excursion even if the set-up is distinctly raw and “one-box”. Over the course of the ten pieces, some of which sprawl upwards of 6 to 12 minutes (but often come back down to earth at the 4-minute mark), Luse is in search of an industrial grinding trance that is slimey, gelatinous, and downright sinister. Brute force thumps and high energy razer lazers, are amongst the insanity of what a singular multi-effects pedal mindset willingly provides. And most of the cuts themselves aren’t really labeled but just edited together into a live-piece that’s always slightly shifting its focus, bringing in a new thump or blast beat, amongst big ‘ol noise with jarring shocks and sudden left turns.

The result though is that you have a tape that’s one-track mindset is going to work wonders on one long-tail end EXCEPTIONALLY well: private press industrial with a big libido. And across the 10 tracks, Luse’s steadfast adherence to this lane actually does pay off in strides. The raw four on the floor of the first twelve miniutes does mutate into a slicked up bass ditty by the 3rd movement that features a radiant tang of guitar feedback. There’s the 4th movement’s “big!” hype synth, one that bass stabs bounce off at first, before it mutates into a giant omnibus blob that often threatens to eat the entire track out in between deranged jitters.

The B-Side opens with the 5th movement, a hi-nrg inversion that proceeds over the course of the following two pieces, to be scraped apart and built into a lurching carnivorous hulking mass. On the 6ht movement its practically stripped of its fleet-footed nature and turned into a glass shards breaking over and over amidst feedback. By the 7th movement its sped back up into a rave inversion that it’s 8th movement turns into noise goo. That it moves so nimbly and with such a minimal but hypnotic set-up gives it that energy needed to carry it to the 9th movement where it almost returns to its original state on this side. Except now it dives deeper into feedback and lashes fanatically. Although I can’t say I was the fondest of the final bonus, a piece of vocal feedback and spoken word psychedelia that is crass and cantankerous in its layering, and demands a sense of time and place that is missing compared to the rest.

Tapes Sold Out at Hot Releases! But Perhaps Available at the Permanent/Mimi Luse Bandcamp Page

When my son was little, he used to dig CAVE’s “Neverendless,” a slab of extended head-spinning kraut jams from Cooper Crain, Rob Frye, et al. He loved that the songs were long, and knew by heart that track 2, “This Is the Best,” was exactly fourteen minutes and six seconds long. Bad Trips (too scary!), some grotesque combination of members of Painted Faces, Aviary, and Slasher Risk (too scary!), have attempted to one-up CAVE on the long-kraut-jams front, with not one but TWO tracks clocking in at my son’s favorite runtime! (Well, close enough anyway – each one is fourteen minutes and fourteen seconds, as if they ran out of tape two seconds too early.) I’m going to have to play this for him and see what he thinks, although he’s eleven now. (He’s into so much good music though!)

Taking cues from 1991 Shredder, the Bad Trips crew aim to ingest the same radioactive ooze that birthed the Teenage Mutant Ninja Turtles and morph into some kind of super-powerful, all-knowing rock band that will melt both faces and minds. (Michelangelo was my favorite, because he was a party dude.) However: as things so often do under a moniker of “Bad Trips,” circumstances take a turn for the worse. While side A’s title track begins as a propulsive, full-band jam, cells and molecules begin to break down halfway through, and synth blurps and squiggles go into full-on Buckaroo Banzai scientific laser pulse mode. You can just feel the flesh from the Bad Trips crew softening and liquefying. By side B’s “Anteater,” everything’s recombining into something weirder and less human, but it’s solidifying into something! We – and by “we” I mean all of us, science, humanity, everybody – are just not sure what it is, or if its goal is to now wipe us all out and claim the earth for itself.

Too friggin’ scary! The ooze, everybody…

But if you like your science of the fiction-y side, and if you’re willing to grapple with existential conundrums, … or even if you’re just infatuated by all the farts and squeaks and wobbles and blurts that synthesizers make, you are in for maybe the time of your life. And that time is exactly fourteen minutes and fourteen seconds per side. I’m never going to forget that now. But I will go in on a large pie if anybody wants to do halfsies…

The Drin – Today My Friend You Drunk The Venom

The Drin – Today My Friend You Drunk The Venom

What’s in with the water in Cincinnati these days? Not only is the city the newest home of incredible punk label Feel It Records, it’s also host to my favorite cadre of art freaks in America: the Future Shock crew. The label – operated by at least one member of The Serfs, Crime of Passing, and The Drin – has been bringing us homegrown, wigged out post-punk since its start as Wasted Tapes in 2016. Every release from this label feels like a transmission from a dark corner of middle America and Today My Friend You Drunk The Venom might be the most claustrophobic yet.

Venom feels built from the ground up with rhythm at the forefront. Almost every song seems to have multiple percussion parts layered on top of each other, even if it’s as simple as an extra snare playing on the offbeats (“Five and Dime Conjurers”) or as complex as whatever the hell is going on with the metal clangings of “Peaceful, Easy, Feeling.” The Drin is focused on exploring the purpose and function of rhythms from different directions. Motorik pounding gets mixed with dub, snares float around in the mix, and unexplainable things explode in the background. It’s a head trip at the construction site. “Post-punk” may be overused as a genre descriptor and overdone as a genre, but Venom feels like a return to classic post-punk. It’s almost the midpoint between Metal Box and Flowers of Romance we never got.

Songs like “Stonewallin’” and “Mozart on the Wing” feel hazy without losing the punk pulse at the heart of all The Drin leader’s Dylan McCartney’s projects. The Drin has also christened itself an honest to God band with this album, expanding the lineup to a six piece and leading to a more consistent sound throughout. Previous albums have felt more like proofs of concept or sketches of what The Drin could be rather than what it is. With Venom, the band has finally found its niche: dark, ominous, bummer but not bummed, pounding post-punk. 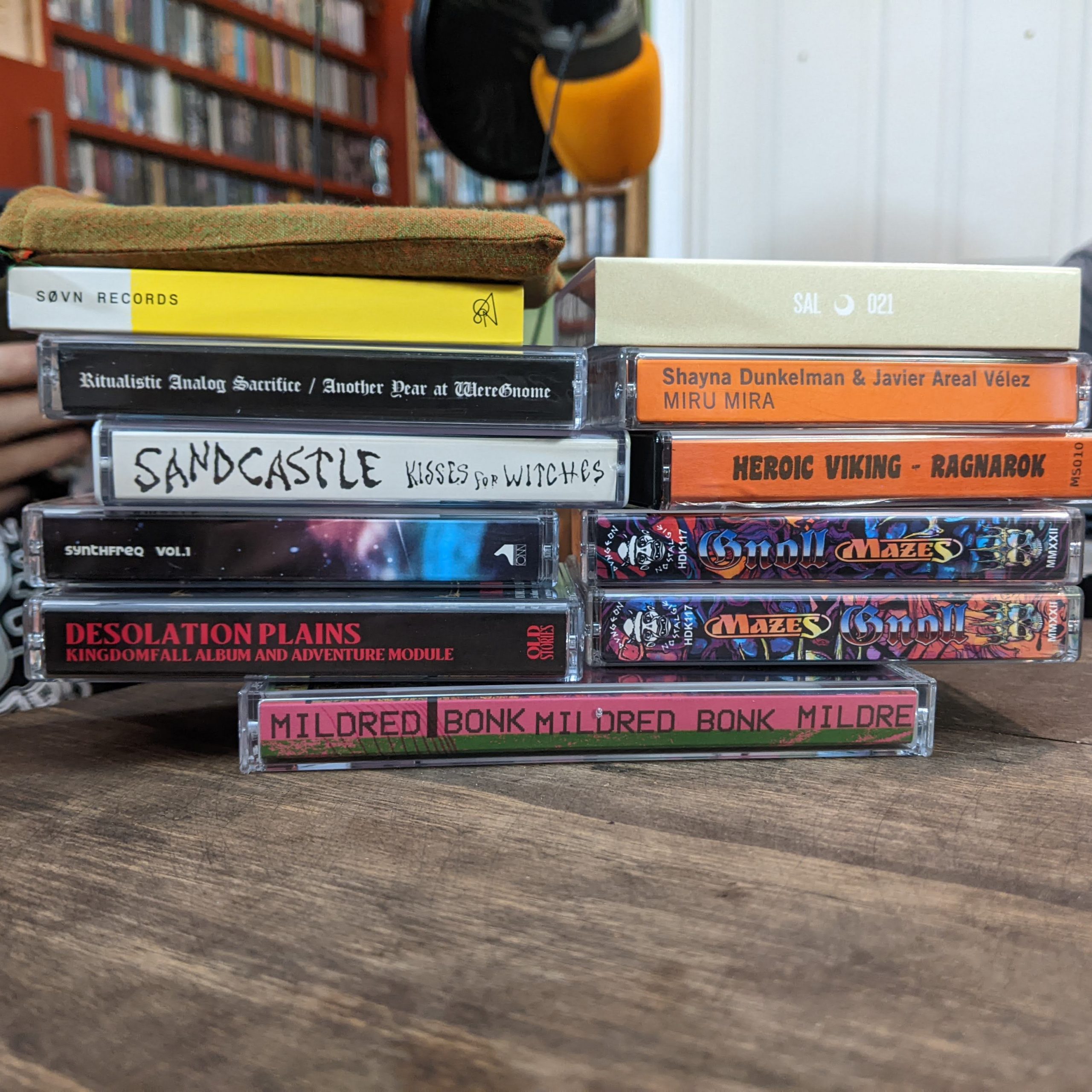 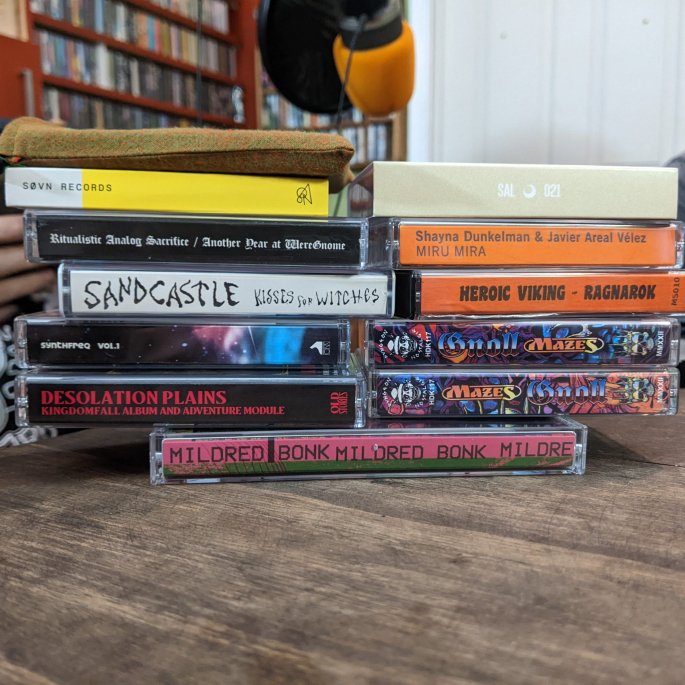