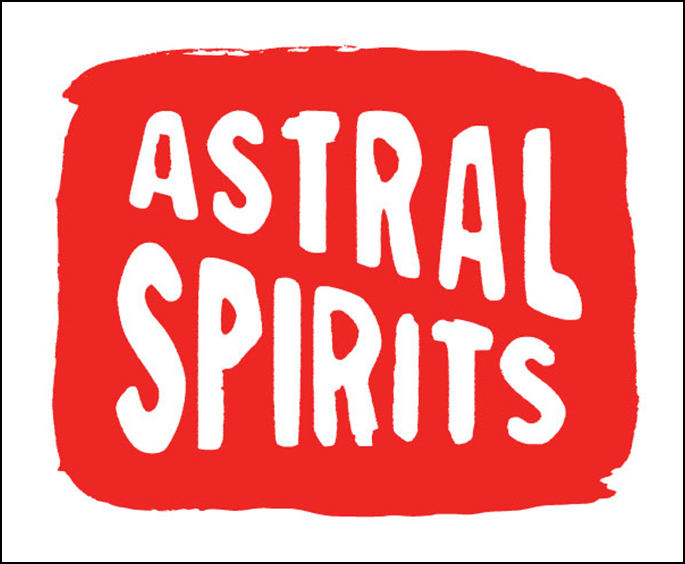 Astral Spirits launched last summer as a tentacle of Austin, Texas based Monofonus Press. They’ve been diligent at churning out cassettes by free jazz ruffians and devotees to the avant lifestyle and, in less than a year of operation, have made quite the dent. I caught up with AS’s Nathan Cross about the goings-on of the label on the heels of a brand new batch of tapes.

Tell me a little bit about the people behind Astral Spirits
Well, really it’s just me at the moment. I was bouncing this idea around about doing a label but didn’t really have the money or connections to make it happen, and then I started talking with the folks at Monofonus. Morgan, Will, and Cory have all been real good friends for a long time, and they were into the idea, so it kinda started there. Monofonus and those guys have been incredibly supportive and have helped me along with the nuts and bolts stuff and I couldn’t be more thankful. Also I should mention my friend Mason McFee (aka Maseman) has done all the artwork and really nailed it with a whole theme and style.  I don’t think it would make the same impact without the artwork and what he’s done.

Totally. The artwork and aesthetic for all the releases really stands out. Was the plan to have consistent templates and artwork or is that something Mason came up with?
We definitely talked about it a lot. We both really liked the idea of something consistent in the vein of Impulse, Blue Note, ESP, Actuel, even Dave Rempis’ Aerophonic label. I also really like that keeping the artwork similar sorta ties together all these various musical styles. I think it helps with linking some of the crazier free jazz stuff with something like the new Shit & Shine or even the Tredici Bacci tape.  But as far as the actual artwork, color scheme, templates, and all that was definitely Mason’s work. He’s done some really incredible work with it.

Is the long-term plan to release mainly free jazz and similar genres, or is that more of a jumping off point for the label?
Yeah, long-term I’d say I will probably focus mostly on free jazz stuff.  I’ve been a huge jazz nerd for a long time and have always felt that this type of music deserves a bigger audience, and especially with a younger crowd (hence why I started by doing tapes). I’ll definitely try to keep things interesting and throw in some less jazz oriented stuff like Nick Hennies & Tredici Bacci. I have a tape from Boxhead Ensemble coming out next month and down the line I have a split tape between Yells at Eels & Circuit Rider UK (both Dallas acts that are very different but both kinda based in improv). I’ll also hopefully start doing some LP’s in the fall and beyond. The first LP will be a studio recording from Icepick to follow up the initial tape.  But I guess at the same time I don’t want to put limits on anything. Right now I just am really focused on a lot of great jazz music/musicians that I don’t think get the attention they deserve.

Let’s talk about that first release, the Icepick “Hexane” tape. It’s a pretty insane collaboration between Chris Corsano, Ingebrigt Håker Flaten, and Nate Wooley. How did that material make it’s way to you?
I love that tape so much. So Ingebrigt has been living in Austin now for a few years and I’ve gotten to know him well through playing shows here in town and such. He’s an incredible guy. When I first mentioned to him that I was started Astral Spirits I really wanted to put out some of his music/collaborations because of his Austin connection. He gave me that recording and Nate & Chris were both okay with it too. I love that it’s not the best audio quality and that you can hear beers opening and other noises. I think that sorta helps take that type of improv off a pedestal and makes it more accessible to a wider audience. I actually did a release show here in Austin and flew Nate & Chris in and had them play with a few other rock bands and it was incredible. While they were here in Austin they went into a studio for an afternoon and recorded the session that’ll be used for the LP. Really, a lot of the connections I’ve made with other musicians have been through Ingebrigt introducing me to folks and it just sorta builds from there. I’ve been incredibly lucky to meet all these people, and incredibly lucky that they are willing to put out a tape! I’m always a little nervous about mentioning tapes to jazz folks, but it’s been nothing but good feedback so far.

Were cassettes a format you were personally interested in before starting Astral Spirits?
Oh yeah. I’ve got a nice little tape collection. I probably starting really buying tapes 2 or 3 years ago when there was the big push. I think I started buying them when I saw some Keith Fullerton Whitman tapes and haven’t stopped since really. I think they are great because it doesn’t necessarily say anything about the quality of music, but it allows someone who may not know as much about it to try it out because tapes are cheaper. If I buy a tape for $5 or $7 and I don’t like it that much, I don’t feel as bad because at least I heard something new and tried. I think it translates really well to free jazz because they are cheaper and quicker to produce. And you can use live recordings or whatever. It’s easier to get the music out there to people at a faster pace than spending 3-5 times as much on a single LP.

It seems like the edition sizes get larger and larger with each batch you do. I suppose the response has been pretty killer so far?
Yeah, I’ve been pretty blown away at how great the response has been in such a short time. The Icepick & John Dikeman tapes flew out the door. We did a repress of the Icepick (which is dwindling) but we’re trying to find that fine line between printing enough for demand but not too many that they just sit around and collect dust. I think there is definitely an audience for these tapes, but I’m not delusional and realize it’s still very much a niche market. With Shit & Shine & Tredici Bacci I know there is a little bigger of a crossover audience and felt like I could print more of those without worrying too much. Generally I like to keep it around 150 though. I think that’s a nice number for now.

When you sent us the first batch I accidentally left my Walkman and Dikeman tape at the park. It was still there the next day, so I don’t think your audience is the 3rd graders who have recess there.
Haha. Hey man, you never know… Funny enough, when John Dikeman was in Austin recently with Cactus Truck they did play a set at an Elementary school in town. You’d be suprised how well kids will respond to this stuff, especially when they see it.

Maybe the kids at the park just didn’t know what the Walkman was…
that’s probably very true.

So tell me about the second batch you did.
Three tapes: Ballister “The Ballister Monologues”, Will Guthrie “Stepped Stoned”, and Broken Trap Ensemble “Upes”. A lot of folks know Ballister pretty well (Dave Rempis, Fred Lonberg-Holm & Paal Nilssen-Love). It’s a live recording of a show they did here in Austin back in May 2014. Total blistering free jazz stuff. Great as always. Will Guthrie might not be as familiar to some. He’s an Australian percussionist living in France these days. Again, this was a live recording from a solo drum show he did in France and it’s mind-blowing. Builds up from silence to a complete racket of sound. Some reviews have mentioned electronics and other sounds, but it’s all drums/percussion. Broken Trap Ensemble is a new group from the Bay Area featuring Aram Shelton (sax), Teddy Rankin Parker (cello), Kristina Dutton (violin) & Daniel Pearce (drums). I’m particuarlly fond of this one. It’s definitely in the free jazz vein, but has a more new music/classical feel to it with the strings, but again it’s all improvised. Really beautiful stuff. and I’m down to about 10-15 copies of each of those tapes and then they’re gone.

What is Will’s relationship to Arlo and Woody? Please say Grandfather.
Ha. I don’t think he has one at all. He is from Australia after all. But, ya know, I’ve never asked him so I couldn’t say for sure. I’ve had people actually tell me they were afraid to check out that tape because of the name Guthrie and they thought I was putting out some folk rock or something.

That’s where my brain went. Haha.

I love how all the tapes are numbered on the cover, but after hand numbering all these, is that something you regret getting into?
Hhaha. I wouldn’t say regret, but I think at some point in the future that might not be on the cover anymore. It’s a little personal touch that I hoped some people would like.

One of the latest three tapes you just released is the Tredici Bacci / ENPSE split. Did you pair them up yourself?
That was all Simon’s idea. I really loved the Tredici Bacci tape on NNA and got in touch with Simon about doing a tape for AS. He said he wanted to do a split tape with another group based on the Gruppo Nuova Consonanza stuff. And actually it’s basically the same people from Tredici in ENPSE doing improv. I love it.

Besides the stuff you mentioned earlier, anything else on the horizon?
In March/April I have releases from Boxhead Ensemble, RED Trio, Rob Mazurek, Mike Majkowski & SSBT. Lots of other great stuff after that from Wally Shoup Sax Trio + One, The Gate, Kid Millions/Jim Sauter Duo, Taco Bells, Mikel Patrick Avery and hopefully a bunch more in the fall. 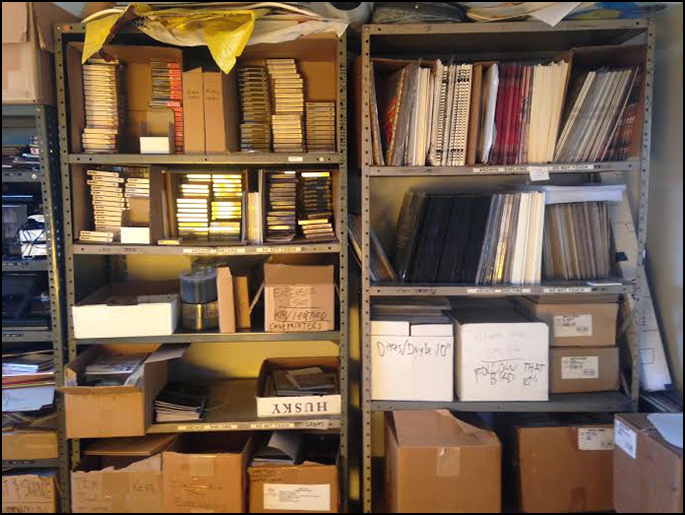