One time college me was playing Radiohead’s “Kid A” at the record store and these eight graders were like, “Whoa… what is this? They’re making such crazy sounds!”

I sniffed derisively like the jerk I truly was and said, “That’s Radiohead, and what you’re hearing is an Ondes Martenot, which the band is newly applying to their sound on this record. Olivier Messiaen used it in his compositions too. Now get the hell out of my store you little shits!” They ran like the wind and probably listened to Green Day in whoever’s mom’s car they came to the mall in.

I’m not gonna lie, Radiohead brought the Ondes Martenot to my attention, and I should have been nicer to those pesky little shits, but the past is the past, and Tomomi Kubo is the future – the future of the Ondes Martenot at least. Kubo and equally future-facing saxophonist Camila Nebbia here team up on “Polycephaly,” a fully improvised set of ingenious interplay that I can’t help but sitting here and listening to in wonder, fully taken by the grand statements and the delicate explorations, the ebb and flow of masterful collaboration by musicians at the top of their game. I’ve still got a bit of goggle-eyed little shit in me too, apparently.

“Polycephaly” is a condition of having two heads supported by a single torso, and this metaphor here is applied to the mind-meld undergone by Kubo and Nebbia during the recording process in 2021. The dynamic they create between two disparate instruments oddly coalesces into gleeful squiggles and joyful melodic conversations, a delight that can clearly only be accomplished when one person shares two heads (and also hands to help play the instruments). The pieces breathe, the sax runs dancing against the sparkling proto-electronics of the Ondes Martenot, sometimes vice versa as the Ondes blurts, bleats, or otherwise wavers upon Nebbia’s foundation, or sometimes even blank space.

Listen close, too, and you’ll hear mouth sounds or jittery speech for a little extra flavor.

So maybe I was wrong all those years ago to take out my insecurities on the less deserving. Maybe I should have been – heck, should be, in general – just a little bit nicer, encouraging people to discover new things for themselves, things that may even change the way they think about music or culture or even the world. At least I hope to encounter that benevolent sentiment, one of easy forgiveness and understanding, when I show up to Tripticks Tapes headquarters and demand to speak to whoever greenlit this awesome-ass tape. I’m really good at demanding stuff and getting my way.

There’s a singular quandary that every plunderphonic-edged beat tape has had to consider for a quarter century: just what does your soul look like? The beat tape is a soul searching endeavor, a maneuvering that can become a personal exploration of pleasure and philosophy. Truth is, they’ll rarely warrant the cross examination; a DJ is of a moment and capturing the mix to digital files or ferric HAVE to be insistent, sleek achievements. Is that what the Australian plunderphonic only known as Sunflower brings to the sound system with Plain Sight? It came out back in summer on the well-inclined Third Kind Records, a UK label that always has keen ear for globe spanning electronic in tantalizing packages.

Well more or less, Plain Sight eschews a dogged-street wisdom with a cunning sardonic wit. It features kicked out breakbeats, soulful horns and harmonica, amongst a litany of pop winks and nods (most notably, Lean Cuisine-frozen meal aisle radio staple, the drum fill of Toto’s Africa); it all oozes to asticky fondue perfection that’s brevity also begets replayability. Sunflower’s tracks are short microcasts–boogieable blips that literally aim straight for the jugular in pathos and insight. The way each track’s hot runtime and odyssey of sounds give it that feeling of old film prints of trailers striking a silver screen. Pulped out all the way through and a genuine fried out delight for bopping and grooving. So little music this year has been reveled as such.

Whether or not that aim was achieved through a crack commando of blunt-laden psychedelic and at times, vaporous beats, or samplicious vocal quips changed on a dime each listen I gave it; truly a tape that keeps on giving in the realizations each sample will give. What is clear though, is that Sunflower is probably the most dogged and righteously pissed plunderphonic since Nevativland burst on the scene with album art that featured guns taken to exorbitant levels. The tape’s samples and swagger has a running motif of gun violence, war on drugs, and American iconoclasm; all critiqued in various contexts functioning as an unabashed agit-pop statement. For its 17-ish minute runtime, that’s smokin’.

It’s no jam-con, nor a pre-emptive strike. Yet, Sunflower’s resilience and begging of this question feels less of an armchair argument. More a blunt attempt to expose fatal error (and reignite the shock of it!) found within a broken system. If a beat tape can be a soul search, then this is akin to a mirror exposing a cultural soul gone jive if not outright blank. One thing is assured that it grows more hollow practically each day as unfortunate exercises in Second Amendment freedoms land in break rooms, school campuses, community spaces, or wherever in this bloody country. A cyclical cycle. Perhaps one the tape knows well enough to have the full run pressed to the a-side and its backing.

Limited Edition Cassette 80 Only at the Third Kind Bandcamp Page

I think it’s only fitting that I end my long-ass hiatus with a thing about a program on a long-ass hiatus, or at least on a long break from a public eye fascinated with other, more versatile media playback software (being Steve Jobs’s sole heir, while a formidable existential position, does make it easy for me to say “Apple whatever” whenever anyone asks my preference). [Ed. note: Ryan is not actually Steve Jobs’s sole heir; please direct any legal enquires to Delaware Dan Incorporated LLC.] I think it’s also fitting that I use the term “long-ass” twice in the first sentence of the first thing I’ve written for Tabs Out in a year and a half. Make that three times in the first paragraph. There’s just something about “ass” and “Tabs Out” that’s so complementary.

There’s nothing ass-related to Theo Krantz’s “WinAmp Selections,” an ode(-ish) to the third-party music-playback program once ubiquitous for Windows machines and now once again available for them after falling out of favor like an aux cable and an iPhone. As a Jobs, I had no idea that Windows was even having any of these problems, but I don’t really care too much, clouding on my focus on anything not me-related. In fact, I had to google the thing, which returned responses like “Does Winamp still exist?” and “Is Winamp safe?” But I like Krantz’s spirit, completely ignoring the second question and blasting the first with a hearty “Suck rocks!” in order to dutifully produce introspective beauty from the elusive software. Yeah, he uses Winamp in his composing and recording process! Like a modern-day Brian Eno but better, Krantz doesn’t stop at “startup sounds,” instead expanding his palette to the two-, three-, and seven-minute marks (seven seconds, Eno? Really?).

But these compositions are, in the artist’s own words, “three tracks about loneliness, flights of fancy, and unease,” not paeans to computers at all, or their softwares, or to anything other than what Theo Krantz was thinking and feeling at the exact time he laid these tracks to Winamp (or used Winamp to lay these tracks to ProTools – what do I look like, a music expert?). And we’re able to feel along with the artist in being lost (that’s the vibe at least) in a crowd, while chugging mirrors (you know you want to try it), and … not turning (the track is called “no turn,” I got nothing to add). It’s all delicate and vulnerable, and isn’t that how we all kind of feel at this point?

Well I don’t. Not me, not the only surviving great-grandnephew of Steve Jobs. I don’t need nobody.

Check out this short run cassette, limited to a scant 20 copies, on Santa Fe’s Cry Like Donna.

Jeff Tobias – Just What I Feel

Jeff Tobias – Just What I Feel

We love the face and all the nonverbal cues it displays for us, don’t we folks? I wager you can take on any face and in 3-5 seconds practically have read it for all its worth; maybe you’d even be ballsy enough to wager you know that face’s life story, its retirement plan, and how it would fair were New York to suddenly be swallowed whole. I couldn’t claim to do this with Jeff Tobias’ face though; there’s too much winking and nodding on the “rectanguloid grotesquery sleeve” and melting catatonic catharsis on the inner j-card to properly quantify into a direct thought. It “just what I [he] feel” so to speak.

Tobias’ most recent cassette finds him at the center of two things: his burgeoning record label, Strategy of Tension and his sopranino saxophone solo in June of 2021. The former debuted proper at the start of the year with Tobias’ first proper solo endeavor, Recurring Dream, which documented in significant detail Tobias’ wry wit and maverick pop tendencies. The kind of pop that he’s long suggested but often shied away from in lieu of headier instrumental and socio-conscious endeavors with Sunwatchers and Modern Nature, just to name a few. Recorded in June 2021 (and mastered by Mr. Garden Portal himself, a nice nod to Tobias’ Athens, GA legacy and connections), Just What I Feel both keeps one foot in Tobias’ recent collaborative tapes with Shiroishi and Cooper, while finally giving him the space to make the 20-track, C29 experience of absolute “hey let’s make a most raucous noise that captures the modern spirit.” If it melts your face, well then that’s already going to plan.

Now though, Tobias is no “sax offender” (a title that belongs to Christopher Brett Bailey). Yet his 20 noise-excursions on the sopranino do present a moment of raw ingenuity with the vessel. Each track title/phrase more or less describes a scenario or imagines a face or body, that with which Tobias uses the sopranino to render in industrial sludge or free-jazz detail; Tobias seriously handles the sopranino as Einstürzende Neubauten handles a power drill, finding a strangely comforting texture to hold down an idea for around 50-odd seconds on average. As such, the tape’s pacing and general fleet action always keeps the listener guessing “what’s behind the corner”–whether that be a garden stroll drone, a garbage truck trying to move in reverse, or a prick’s smirk documented in grotesque sonic detail. In sticking to raw instrumentals and exploring these textures in concise manners, Tobias grants listeners the ability to piece together just what these sounds could represent on their own merits (well maybe not Lecturer, I think you can figure that out). Yet, the black humor of this all leaves behind a strange curio of late-pandemic era New York City; a truly situated dispatch of sprawling, unfettered noise if there was one.

Limited edition of 100 cassettes, w/ rectanguloid grotesquery sleeve in a brain pink shell, and a sticker, are available at the Jeff Tobias/Strategy of Tension Bandcamp Page 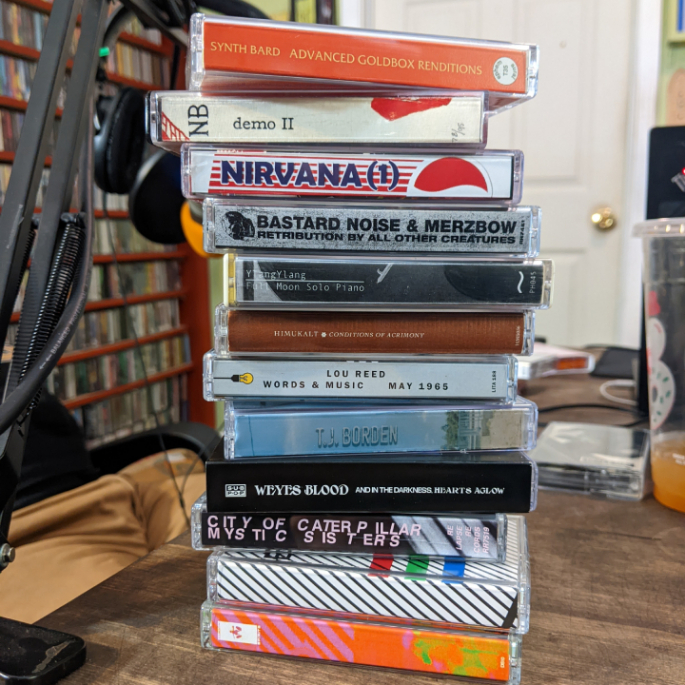