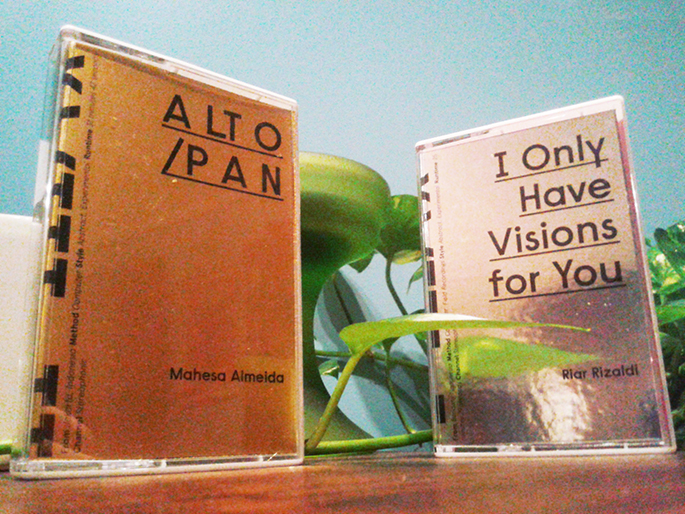 You know that feeling of coming out of a daze, face down on a factory floor, discovering as your mind unblurs from it’s snooze that the workers around you are half robot, half bug? No…? Familiar or not, Hasana Editions has bottled up that tender confusion like hot sauce and wants to dose your eggs with it. Based in Bandung, Indonesia, Hasana is not a new label, but one that has been reimagined.

“Originally started in 2010 by artist Duto Hardono as Hasana Private Press, its project has evolved from publishing the artist’s own works to releasing seminal projects such as Bin Idris. It was defunct for a while before being revived in 2017. Now operated with partial support from the Faculty of Arts and Design, Bandung Institute of Technology, Hasana Editions attempts to tap into and reflect on the creative acts around the region, while fostering and connecting these acts to global scene.”

The two new tapes they have for us, all nestled in metallic paper with artwork far more straight forward than the audio, are a trip. Riar Rizaldi goes into deep Mr. McGoo zones on “I Only Have Visions for You.” Power tools rev and glasses of water spill, but each step taken across the scaffolding or through the kitchen avoid total disaster by a nail clipping. With McGoo, we ended up with a Leslie Nielsen movie. With Riar Rizaldi, we get a blustering, disjointed collage that almost spills boiling lobsters on itself. I’ll take Riar Rizaldi without flinching. And I fucking LOVE me some Nielsen. These sounds were laid to tape in 2017 in Seoul, South Korea.

Mahesa Almeida is more laid back. Not in the sense that they are relaxing pool side. No, more like they never got up off of that factory floor. “A LT O/P A N” is a dehydrated cassette tape that Mahesa chisels sound onto with a jeweler’s hammer and loupe. Sounds ruffle around like lumps being flattened out of a carpet. On the B side, Mahesa hints at his love for video games, sounding off miniature nods to arcade classics, but the motherboards have never been dustier.

Both artist find time to toil, clatter, and shake various objects, bringing fidgety racket front and center. Or maybe that is the bug-robot workers? Both are editions of 100.